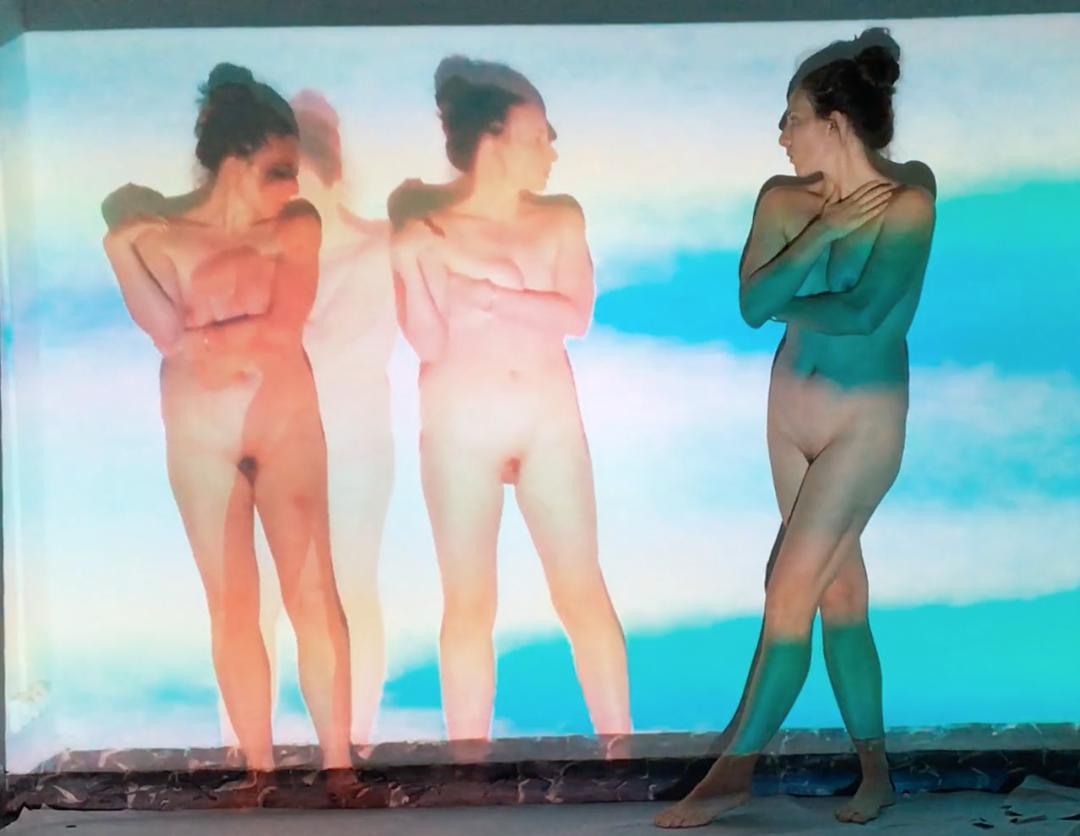 As a young girl I was strong and I loved being strong.

I could hit a baseball far and dance on pointe. I loved clothes and expressing myself physically.

I took pride in my body and all it could do.

But when I became a teenager–when that self-expression and body-love suddenly became dangerous to others, when I was sexualized without understanding why, shamed at school for wearing the same outfits that brought catcalls outside–suddenly my body didn’t belong to me anymore.

It seemed to belong to others’ eyes, how they saw me and what my body meant to them. I eventually ascribed to it, giving over my body image to others’ eyes because I didn’t know I had a choice. I compared myself to models, tv, musicians, etc. I was desperately unhappy, for years.

Art modeling was a last resort– I had graduated from university, directionless and exhausted. I longed to return to the place where I had felt most happy, the very art center I had grown up taking classes. I moved back to my hometown and took the only available position at the center: art model. Because I trusted the environment–I had drawn from models for years and knew that it was a safe space–I was not as uncomfortable as you’d think I might be with the idea of modeling.

What surprised me, however, was how I did feel once I was posed in-front of those students. I felt strong again, I felt centered, I felt good in my body and confident.

I left in a daze, excited that I was booked for another class, and wondering why I felt so new. It was the context — the idea that there was no standard I was being held to or holding myself to, becoming ephemeral and eternal all at once through the brush strokes and charcoal.

Previously, I had only encountered my image through mirrors or snapshots, flattened and presented for evaluation. As the art model, though, I wasn’t there for judgement or consumption, rather I was there for interpretation and inspiration;

Later, I would further see that each artist is actually drawing themselves, not me, which liberated me even more — and at the same time this would a be harbinger for what was to come: how the censoring of my body in my artwork would be more about other’s perceptions than my own intentions.

I eventually left modeling to pursue my own art career, buoyed by my regained self-confidence and body image.

I first encountered censorship of my artwork before I even had an instagram account. One day I went to a Walmart to print some photos of my artwork, and I was thoroughly and intentionally embarrassed by the staff who called it “pornography”.

My prints were shredded in front of me and they even told me “we usually call the police in situations like this”.

My cheeks burning but needing answers, I pushed them to explain to me what made the images pornographic, to which they eventually could only point out that they showed “your nipples”.

This was literally the first time I’d heard this and I left the store laughing in shock, then sat in my car and cried in frustration.

After years of finally feeling some kind of body autonomy through modeling, it was a devastating reality check.

I violently remembered all the times my body felt like it belonged to the judgement of others.

When I’d be sent to the principal’s office in school because my clothes were “distracting”, when I suspected bikinis weren’t actually for my benefit, when boyfriends would ask me when I was going to give up art modeling because they were jealous, every “compliment” and comment and judgement that I’d swat away with brittle grace, the man who expected sex in return for “supporting” my art career and all the people who assumed my use of my body in my work and art meant I was “easy”.

I became angry and my anger found a solution that satiated me for a while:

I decided that if they said I couldn’t show my nipples, then I would put my nipples Everywhere.

I created stickers of my nipple and started putting them on walls, lampposts, my car hood, and I began handing them out to friends. They laughed at first, but then we started talking.

That was when I realized that this was an issue that needed to be talked about, the hypocrisy of the situation– the fact that women’s (and not men’s) nipples being censored and shamed is the gateway to seeing the larger inequalities that our bodies are facing.

I had started the Exposure Therapy project which has now reached over 40 countries, and has expanded to a larger conversation and community online and offline.

Nudity is not Pornography

For a long time, I simply enjoyed the activism, gathering people to the cause, and sticking stickers everywhere. Instagram would take something down, and I’d have an opportunity to point out the problem to more people.

I knew the project had grown out of my artwork, as a consequence, but I saw them as separate, mutually beneficial enterprises. Today, however, I would say they are far more intertwined.

As the project expanded, I saw more and more artists like myself who were suffering because they couldn’t show their artwork. It was something more than run-of-the-mill inequality and sexism (which of course is not something to take lightly), I could see my artist peers suffering emotionally, financially, and professionally.

The repression and erasure of female artists is a tale as old as the art world.

As an art model, I had given my body happily to the production of art, and to be truthful, all the artists I worked for privately were men. But when it came to using my own body, myself, in my art, I was perpetually facing punishment: censorship, learned self-censorship, deletion, erasure, shaming, even labeling of “sexual solicitation”.

Instagram tell me my art is contrary to the “Community” because I use my body in that art, when male artists use the female body– my own body– to make “acceptable” art.

I have grown to see how my fight with Exposure Therapy can be used to promote female artists who use the body, as well as advocating for that cute selfie someone took at the beach and was censored for.

Women and non-binary people are constantly subject to judgement, sexualization, and assumptions about our bodies regardless of our intent or consent. We suffer from the assumption that any way that we choose to present our bodies is somehow related to our sexuality, especially when we choose to use our nude bodies in our artwork or activism.

Both online and offline, this assumption results in the censorship, denial and misunderstanding of a whole genre of artwork created by women and non-binary artists, regardless of their artistic intentions.

I have often used the phrase “Nudity Is Not Pornography” as a way to jolt my audience to question their own assumptions about the nude body and what it means to themselves as well as society. This linkage we as a society have forged between nudity and sex must be severed if we are ever to have true body autonomy, neutrality, and equality. Only then will female and non-binary artists and body activists be heard on their terms, and given the kind of platform they deserve.

Regardless of your intentions with your Community Guidelines, you lack nuance and a desire to actually respond to the concerns of your users. We all know you to be capable of the worst kind of gaslighting, and many of us have learned how to dodge, appease, and get around your arbitrary and harassing judgement. But this is not a game for us, for many of us this is our mental health, our career opportunities, and our access to the greater world.
The fact that you are just a company and can make your own rules is practically irrelevant now — especially during this last year, Instagram has taken the place of a sort of public space, the only widely-used alternative to being able to share our artwork with an audience that we have painstakingly gathered through years.

You are more than just a company — you have established a system in which you create and destroy, reward and abuse, and we, as your “content creators”, deserve to be treated better.

You should recognize you have something very special in us. We love you, and we just want you to be better to us. What we can create together could be extraordinary. (In writing these words, I’m all too painfully reminded of how many times I’ve said these same things in other bad relationships….)

In our #MeToo world, I think we’ve all come to recognize gaslighting and power abuse when we see it.

Your retaliatory, discriminatory, shameful silencing of female and nonbinary voices is obvious to us.

Your abuse of power by not allowing us to reach you, your blockade of lawyers and nondisclosure agreements, your feigned caring, your ability to snatch our voices away entirely… we see you.

You claim your Community Guidelines are there to protect users, but all we see is every bit of how you are protecting yourself.

Emma Shapiro is an American artist and feminist activist living in Valencia, Spain. In 2017, she created the international art project and movement Exposure Therapy which has reached over 40 countries. Emma is a multidisciplinary artist exploring identity, memory, ancestry and ephemerality. Using her own body as her primary medium, she seeks to represent the human and female form as a timeless event, ephemeral yet fixed through genealogical and physical memory. She sees her body as a vessel for ancestral history — a link to family lost to anti-semitism and the Irish Famine — and thus a primal act of resistance against injustice, and a representation of hope.

Her background as a professional art model allowed her to experience her own form as not only subject but also concept. Through her use of layered video projection, self portraiture, activism, and repeated encounters with her own image, Emma deconstructs and questions the meaning of our bodies, how we know them, and what they could be. Because she uses her own nude body as her primary medium, her work is often forced to engage with objectification and censorship of the nude. While her work is made out of a different intention, it participates in this fight willingly.

You can catch her lecture “Who’s Afraid of the Nipple?” and subsequent panel discussion “Censored Bodies Talk Back” with the London Drawing Group on May 31 and June 2, respectively.
And keep an eye out for her upcoming artist’s book this summer, published by The Liminal Gallery in Valencia, Spain.